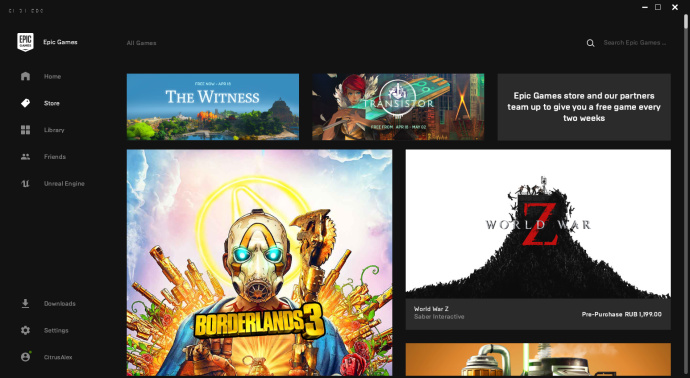 I won’t re-tell the whole story. Most of you probably know that Epic Games has a game store / launcher, financed by the truckloads of cash Fortnite generates (although I still can’t understand why this game is so popular), and that Epic Games says it created it because Steam isn’t fair to developers, which, you know, is hard to totally disagree with.

Steam has its issues. Good games can be buried under the huge amount of shovelware that gets released everyday in there, between asset flips, bad copycats, and downright offensive games, it’s hard to be discovered for a small indie title, and Steam will take 30% of your earnings on top of that. They applied reductions to that rate, but these are based on quantity sold, and thus will affect big, AAA developers a lot more than indie, which are the ones that are the most at risk right now. AAA titles are always promoted and pushed to users, they don’t need another advantage.

Epic seems to want to bring a more curated store, with less quantity, and more quality, at least that’s their take. The way they are doing this, though, is what gets most people riled up, since EPic has now the reputation of buying exclusive rights to huge properties, such as Metro Exodus or Borderlands 3, and preventing people to buy and play them on their platform of choice (namely, Steam). They also seem, according to some developers, to be pushing these contracts hard, in a “no exclusive means we don’t distribute you at all” kind of way.

This exclusive strategy is a topic for another post, let’s just be quick about it and say I find it ill-advised, anti-competitive, and that it only garners ill will towards Epic Games. It’s a short term strategy that will probably bite them back in the rear later, but let’s not spend too long on this. What I want to talk about are the impacts on Linux.

Steam, as the biggest and most used game store on the market, has been Linux-friendly for a few years now, first with Steam on Linux and Steam Machines / Steam OS, and more recently by funding Proton, a fork of Wine including DXVK, D9VK, and other needed tweaks to make Windows games run on Linux with close to native performance.

What Valve has done here is amazing. Without toying with configurations, experimenting, and finally finding some settings that allow a game to kinda work with Wine, you can now one-click install and play a ton of Windows games that have and probably won’t have any native ports. A quick trip to ProtonDB, an independentaly maintained site, will net you all the information you need to make sure a game can or can’t run, and if a few tweaks are needed, which can generally be applied by a simple copy paste in the game properties on Steam.

I play Warframe (with a custom Proton build, a copy/paste operation), Inquisitor Martyr, Killing Floor 2, Warhammer Chaosbane, Diablo 3, Vermintide, Mordhau, Mordheim, Risk of Rain 2, Age of Empires 2, The Witcher 3, and others, all games that don’t have a native port, and apart from Warframe, none of them required any tweaks, and run with high framerates and without hiccups.

Valve, with their integration of SteamPlay / Proton, has changed the gaming landscape on Linux, and the only thing really missing now is anti-cheat software integration to allow some huge multiplayer titles to run (I’m just waiting on Vermintide 2 to work, but that’s me). Epic, on the other hand, does not care about Linux, for now.

Epic Games is not Linux-Friendly

Hey, their store still doesn’t allow cloud saves for a lot of games, has no shopping cart, and lacks any kind of achievement system, so they have a bunch of stuff to work on before they even start thinking about Linux. Except they don’t have to think too much about it. Valve has done the brunt of the work by packaging Proton, and distributing it as open source. Surely, integrating Proton in the Epic Games Store wouldn’t be a tantalizing prospect for a company that develops a 3D engine, right?

At the moment, the Epic Games Store can be run on Linux, through Lutris, although a lot of people are reporting issues with it, but that doesn’t mean the games themselves will start, and there is no simple way to apply specific tweaks to a game without affecting all the others. This is bad, and its made worse by the fact that some games can only be played through the Epic Games Store. I loved Berderlands 1 and 2, and I’d like to play the third one with my friends. Had it been on Steam, I would have happily bought it and played it with Proton, assured that after a few days, the community will have ironed out the kinks (assuming there won’t be any anti cheat software issues), or the developers of Proton will have issued a patch to make it work, like they did with Rage 2.

With it releasing only on the Epic Games Store for now, not only do I have to use another account, another friends list, but I also have zero guarantee that the game will even run, compared to the same game on Steam, where I’m pretty sure it would have run fine. If I need to apply some tweaks to that specific game, it might break another game I need to run, since I have to apply those tweaks to the Epic Games Store itself, not the specific game.

The combination of Epic not caring about Linux support at all, and their exclusive strategy makes it very hard to trust them as a company, and impossible to buy a single game on their platform. So I guess I’ll have to settle for waiting for a Borderlands 3 Steam release, and play by myself, since my friends will then have moved on to something else.

Competition has to be based on the products’ quality

I’m all for having more competition in the online gaming store department, it’s always good for the consumer, as long as anti competitive practices are not used. I understand why a developer would sign an exclusivity deal with Epic Games. They get more money up front, and are almost assured that you can make your money back. But for consumers, being forced to use a specific platform is a bad situation. This is a direct result of the Steam monopoly on PC, but the end result is not better for the consumer, it’s markedly worse, especially for the Linux consumer.

So now, there are two ways this could go: either Epic Games integrates Proton or an equivalent in their store, and us Linux users can keep playing, although reluctantly for some of us, or they don’t, and Gaming on Linux loses the momentum it has gained in the last year or so, with a trickle of AAA games not being playable, or with so much hassle that it defeats the “one click” install Steam has accustomed me to.

Either way, exclusivities have to go, for competition to be based on quality, features, and letting users favor the better product.